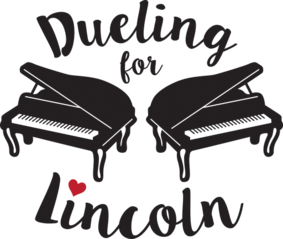 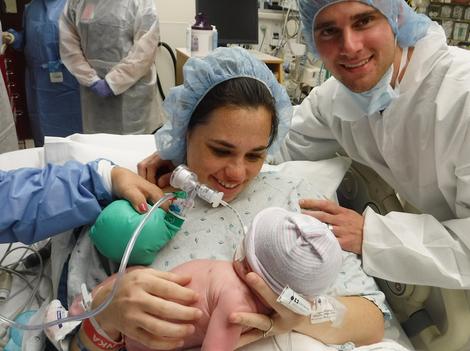 He was born a week before our scheduled induction date, but already

so loved.  Lincoln was prenatally diagnosed with hypertrophic

cardiomyopathy at 34 weeks and there were issues with pleural

effusions throughout the pregnancy, so we knew that he would

have some difficulties his first few weeks of life. Nothing prepared

us for what was to come.

The moment he was born he was promptly taken away and

surrounded by a team of medical providers. Once he was stabilized

short minutes before he was whisked away to the NICU.

From that moment we were catapulted into a world in which we never imagined living; a world of sickness and pain, joy, and the deepest love, all in the least expected places. A world Kelsey knew all too well, during her 7 years as a nurse in the Heart Center at St. Louis Children’s Hospital.

Lincoln spent a few days in the NICU and then was promptly transferred to the Heart Center’s Cardiac Intensive Care Unit, Kelsey’s home base. The next few weeks were overwhelmingly filled with echocardiograms, x-rays, ultrasounds, blood work, a CT scan, two chest tube placements, two trips to the cardiac catheterization lab, and an ECMO scare. He received consults from Cardiology, Heart Failure, Genetics, Pulmonology, Hematology/Oncology, Neurology, Endocrinology, Urology, Nephrology and Infectious Disease; each of them fighting for Lincoln along with us. Each of them trying to figure out what was wrong and what could be done. All the while we stood thinking, maybe this is a dream? This can’t really be happening. How is this happening?

We watched as Lincoln pulled through periods no-one expected he would. We had too many conversations where we were told that there wasn't anything else that could be done and that it was now up to Lincoln to pull through; and each time he did. We watched his numbers fall and we watched them rise, and each day we had hope. Hope for one more day, for one more moment with our sweet, handsome little man. We hated our situation, and yet, simultaneously felt like the luckiest parents in the world to know and love our son.

We fought for him, and we gave him everything we could. We gave him love, we read to him, we held him and kissed him. And the weeks he was asleep from sedation, we rubbed his head and held his hand, and we whispered into his ear how loved he was, how his mommy and daddy were always there. We breathed desperate prayers that God would somehow let him know what we could not, that he was precious and he was loved and he was so deeply wanted.

Lincoln received a round of chemotherapy to treat his leukemia, which he tolerated very well. He also underwent a lymphangiogram and Lipiodol procedure in an attempt to stop the massive amount of chest tube drainage he was having. Many physicians were skeptical that this procedure would work as it had never been performed at St. Louis Children’s Hospital. But it worked for Lincoln. His chest tube output stopped and we were able to remove his chest tubes and start weaning him from his ventilator. Everything was starting to look a little brighter. But a few weeks later he began to deteriorate again.

Lincoln had a rampant flare up of his leukemia. He was medically paralyzed and sedated for the second time as a second round of chemotherapy was given in an attempt to save his life. But the aggressiveness of the leukemia coupled with Lincoln’s already very sick heart was just too much for his little body to handle. So we held him, kissed him, loved him, and told him just how immensely proud of him we were. As his numbers fell for the last time, he was finally able to rest.

We are so thankful for the eighty three days we were able to hold his hand in this messy, beautiful world. Unfortunately, this reality isn’t just ours. It’s shared. It’s shared with hundreds of thousands of other men and women, all equally afraid, and all desperately in love with their children. We run on willpower, faith, hope, and a touch of insanity. We fight for their lives as we advocate and learn them like the back of our hand. We live for their smiles, their snuggles, even just a glance of their eyes our way, something that will tell us they know– they know they are loved. They deserve every ounce of strength, of love, of faith, of hope, of fight that we pour out. They deserve all of our heart, because these perfect and fragile children give us nothing less than everything they have.

It’s a painful thing, losing someone you love. It wrecks you at your very core. It shatters you; they take a piece of your heart with them as they go. It is earth-shaking and dream-crushing and horrible in every way imaginable. But loving them is worth every second, every whispered prayer and every ounce of love. Every time you held their hand, every tear you shed, every smile you smiled, every kiss you laid on their head, every lullaby you sang and every single time they looked at you with those soulful eyes, and told you, in their own way, “I love you, too.” They are worth it all.

Now we refuse to allow the tragedy of Lincoln’s death to negate the beauty of his life, the depth of his impact, and the sheer joy he was able to give to us. Although there is indescribable pain in losing Lincoln, there is even more joy in having known him. We love to hear that he is remembered and thought of by others. We love to hear the impact he made on others, even if they were never able to meet him. We love talking about him, just as every parent loves to talk about their child. So it’s okay to mention him. It’s okay to say his name; because he’s as real to us as anyone else, even if we can no longer reach out to hold his hand.

Here is where we need your help. We need your help in carrying out Lincoln’s Legacy. We need your help in an effort to support the families experiencing these horrific tragedies. We need your help funding research for treatments of juvenile myelomonocytic leukemia and congenital heart disease. Please join us for our annual Dueling for Lincoln charity event. There will be entertainment, food, drinks, and games. As well as a silent auction. Head on over to our events tab to purchase tickets for our 2nd annual event.
​